Spiders have a body that is divided into two parts: the “cephalothorax” (fused head and thorax) and the abdomen. They have eight legs, while insects have six. They have neither wings nor antennae. At the end of their abdomen are the “threads”, from which come the silk threads which are used to make the canvas, the shelters and the bags containing the eggs. Females are generally larger than males.

Body parts of a spider 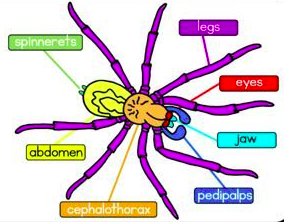 In addition, spiders are unable to chew or absorb solid food. To feed themselves, they must liquefy their meal before ingesting it. They inject digestive fluids into the body of their paralyzed prey and then suck the contents, leaving only an empty exoskeleton.

The spider’s orbicular web is an effective passive trap, intended to capture insects. The latter, who have seen nothing of the ambush, remain glued to the silk threads until the spider comes to paralyze and eat them. Most of these webs are woven by species of the Araneidae family .

The threads of the canvas are not all sticky. This is the case with the wires forming the spokes. Only the silk which forms the spiral is coated with an adhesive substance. The vibrations produced by the prey struggling to free itself from the web alert the spider. It has on its legs, special non-stick bristles and moves only on non-sticky threads thus avoiding being caught in its own trap.

Some spiders produce silk threads made from the strongest material known on the planet. At equal thickness, these wires are stronger than steel! Their elasticity is just as remarkable, since they can be stretched over twice their length without breaking them.